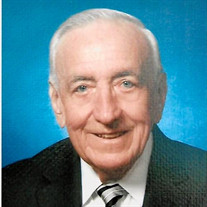 Harold Olmstead Roberts passed away on April 18, 2020, at the age of 88, after a long-term battle with multiple myeloma. Mr. Roberts was born August 28, 1931, in Dover, Tennessee, to Lydia W. Roberts and Guy L. Roberts. Mr. Roberts attended Oak Ridge, Tennessee, High School, and graduated from the University of Tennessee in 1953. He was a member of Lambda Chi Alpha social fraternity, Delta Nu Alpha Transportation Fraternity, Alpha Phi Omega Service Fraternity, and served as ROTC Cadet Captain with the designation of Distinguished Military Student. He was an avid golfer and tennis player and was a member of the Classic City Tennis Club in Athens. He was a Captain in the United States Army and served on active duty during the later stages of the Korean War. He spent the majority of his career with Brunswick Corporation in the fields of manufacturing, distribution, and general management. He served as plant manager of the Marion, Virginia Bowling and Billiard Table facility, Vice-President Manufacturing of the MacGregor Golf Company (a division of Brunswick), and served as President of the Briarwood Division of Brunswick, manufacturing and marketing billiard tables, game tables, and numerous home recreation products. He was a graduate of Brunswick Corporation Advanced Management Program. He served as President of the Burruss Company of Lynchburg, Virginia, consisting of two plants engaged in the manufacture and distribution of hardwood house flooring, laminated truck flooring, and butcher block furniture components. Mr. Roberts served as co-founder and co-owner of Roberts & Bowers, Inc. of Albany, Georgia, engaged in the operation of a security business, marketing burglar and fire alarm systems to commercial, industrial, and residential customers. Later in his career, Mr. Roberts joined the University of Georgia Small Business Development Center serving as Regional Manager of Southwest Georgia, based in Albany, Georgia, followed by relocation to Athens where he served as District Director of North Georgia offices, and finally, as Assistant SBDC State Director. Mr. Roberts retired from UGA in December, 2001. During his career, Mr. Roberts served in numerous charitable, civic, and business organizations, including Georgia Business and Industry Association; Georgia Economic Developers Association; President of Brunswick Keymans Club; President of Marion, Virginia Rotary Club; President of the Chamber of Commerce of Marion, Virginia; member of the Lynchburg, Virginia Chamber of Commerce; member of Virginia State Chamber of Commerce; Chairman of Smyth County, Virginia American Red Cross; member of the Board of Directors of Smyth County, Virginia Community Hospital; and member and frequent instructor for the American Management Association. He served on the Board of Directors of Holston Hills Country Club of Marion, Virginia, and the Doublegate Country Club of Albany, Georgia. Mr. Roberts was preceded in death by his first wife, Joan M. Roberts, and his brother, Guy L. Roberts II. Survivors include his wife Nancy P. Roberts of Athens, Georgia, son Richard S. Roberts (wife, Sabrina) of Villa Rica, Georgia, son Michael W. Roberts (wife, Nancy) of Suwanee, Georgia, and daughter Julia A. Humphries (husband, Shane) of Coppell, Texas; five grandchildren, Alex Humphries (wife, Mia) of San Antonio, Texas, Erin Humphries (husband, Mitch), of Dallas, Texas, Rachel Humphries of Dallas, Texas, Moira Humphries and Madison Humphries, of Coppell, Texas. Harold loved, most of all, his family, the University of Tennessee, and the UT sports teams, which he followed closely. He was a member of Tuckston United Methodist Church, where he served on the Administrative Board (2015-2017) and was a member of the Pathmakers Sunday School Class. In lieu of flowers, donations may be made to Tuckston United Methodist Church, 4175 Lexington Rd., Athens, GA 30605, designated for the building fund. Due to the Corona Virus pandemic, services will be held at a later date. Lord and Stephens, East, 4355 Lexington Road, Athens, GA is in charge of arrangements. www.lordandstephens.com

The family of Harold Olmstead Roberts created this Life Tributes page to make it easy to share your memories.

Send flowers to the Roberts family.