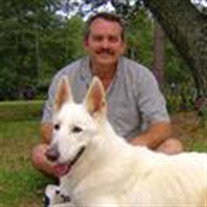 Jack D. Culpepper, 59, of Chesterfield, SC suffered a fatal heart attack while fishing with friends on April 21, 2018. Born in Americus/Sumter County, GA on March 2, 1959, Jack spent his childhood years in Butler/Taylor County, GA where he excelled in sports and academics, graduating second in his class in 1977. Following high school, he enlisted in the United States Navy, serving honorably for five years. Jack received his Bachelor of Science in Forest Resource Management from the University of Georgia in 1996, graduating magna cum laude. In 1998, he earned a Master’s degree in Forest Resource Management and Business. Since 2003, Jack was employed by the U.S. Fish and Wildlife Service. For the past 11 years, he served as Forester for the Carolina Sandhills National Wildlife Refuge in McBee, SC and the Pee Dee National Wildlife Refuge in North Carolina. Jack was preceded in death by his father, Jack Culpepper in 1998. He is survived by his mother and stepfather, Nettie Jo and Lamar Perry of Ila; sisters, Myra C. (Philip) Morris of Athens, Pat Culpepper of Decatur; Jolyn Culpepper of Ila; niece, Abigail M. (David) Russell of Chattanooga, TN; nephew, Joseph P. Morris, Minneapolis, MN; and great niece, Rosie Russell of Chattanooga. Funeral services will be Saturday, April 28, 2018 at 12:00 PM at Campus View Church of Christ in Athens. Interment will follow at Athens Memory Gardens. The family will receive friends at the church from11:00 AM until service time. Lord and Stephens, EAST, is in charge of arrangements.

The family of Jack D. Culpepper created this Life Tributes page to make it easy to share your memories.

Send flowers to the Culpepper family.