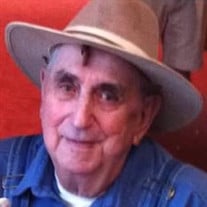 Dr. Milton White Neathery, Sr., 92, of Athens, passed away on Sunday, October 18, 2020. A resident of Athens since 1969, he was a son of the late Ernest Perkins Neathery and Fannie Logue Neathery. Dr. Neathery received his PhD from the University... View Obituary & Service Information

The family of Dr. Milton White Neathery Sr. created this Life Tributes page to make it easy to share your memories.

Send flowers to the Neathery family.