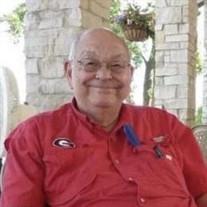 Ronald A. Helwig, 86, of Bogart, GA, died on Monday, November 22, 2021. Born in Cleveland, OH, Ron was the son of the late Clarence Helwig and Emma Mellinger Helwig. During his lifetime, Ron’s primary career was as an accountant, most memorably at Pinney Dock in Ashtabula, OH and Pearle Vision Center in Athens, GA (where he was also a customer favorite behind the sales counter). After retiring from accounting, for many years he also served many happy customers at Sears Optical in Athens and played a pivotal part in the life of Briarwood Baptist Church in Watkinsville, GA as its custodian. A lifelong musician, Ron was an accomplished tuba player and a staple member of the bass/baritone section in the church choir of every church he ever attended. Nothing would bring joy to his face more than the “oom-pah” music of John Philip Sousa or gospel favorites like the Bill Gaither Trio – except, possibly, a healthy serving of his wife’s apple pie or rhubarb pie, or his mother’s pork cake. A generally quiet and unassuming soul, he often surprised people with a showman’s knack for catching them off guard, delighting them with a fantastic (terrible) dad joke, an unbelievable hook shot on the basketball court, a death-defying flea hop and backwards skate at the roller rink, or a penchant for slinging round house curve balls from third to first with a huge grin on his face. He served his community as a Boy Scout Master and as a member of the Athens West Lions Club, but above all, Ron was a dedicated servant of Jesus Christ and a faithful churchgoer. Over the years, he was a valued member at Ashtabula First Baptist in Ashtabula, OH, South Ridge Baptist Church in Conneaut, OH, and South Daytona Baptist Church in South Daytona, Florida; then, for the past 25 years he has been a stalwart member of Briarwood Baptist Church in Watkinsville. In every church, Ron willingly gave of his time, talent, and treasure, always in the choir and as a teacher in Sunday School, and also as a Deacon at South Ridge Baptist, South Daytona Baptist, and Briarwood Baptist. He is preceded in death by his beloved wife of 52 years, Juanita Irene Jersey Helwig, and his sister, Rogene Helwig Lockwood. Survivors include his three sons: Steve (Angela) Helwig, Dave Helwig, and Mark (Debra) Helwig; six grandchildren, and five great grandchildren. A memorial service will be held Wednesday, December 22, 2021 at 11:00 a.m. at Briarwood Baptist Church. In lieu of flowers, the family requests that memorials be made to Briarwood Baptist Church in Watkinsville, GA with a designation for the Sanctuary Choir or the Youth Sunday School Department. Lord and Stephens Funeral Home, WEST, Watkinsville, GA is in charge of arrangements.

Ronald A. Helwig, 86, of Bogart, GA, died on Monday, November 22, 2021. Born in Cleveland, OH, Ron was the son of the late Clarence Helwig and Emma Mellinger Helwig. During his lifetime, Ron&#8217;s primary career was as an accountant, most... View Obituary & Service Information

The family of Ronald A. Helwig created this Life Tributes page to make it easy to share your memories.

Send flowers to the Helwig family.